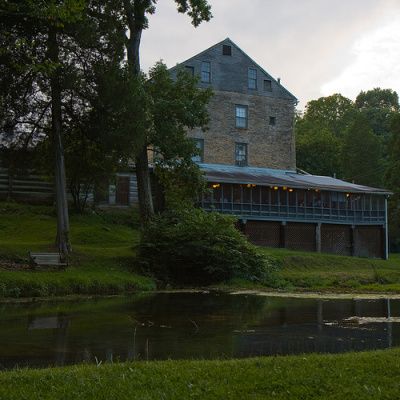 Settled for over three centuries, the Doe Run area is packed with plenty of history, and plenty of ghosts.

The area that the Doe Run Inn rests on was formerly a Native American settlement in the late 1700s. It was recorded that Squire Boone called the nearby creek Doe Run because of the unusually large amount of deer that lived in the area. The Doe Run area was also the first settlement in Meade County. Most likely home of the now disappeared town of New Philidelphia.

Originally, the Doe Run was first called Stevenson’s Mill and was an actual timber cutting building. Over the years, the building ceased operations and was repurposed in 1901 into an inn due to a nearby water spring that was discovered and purported to have healing powers influenced by Native American history. Doe Run is unique in that all of the water is groundwater, mostly from a large spring that always flows at about 55 degrees. Biologists and grad students from the University of Louisville studied the stream in great detail from the late 1950s through the 60s. By 1958, a new set of owners added a restaurant and called it the Doe Run Inn and it was open for business. Decorated with over three centuries the Doe Run Inn is packed with plenty of history, and plenty of ghosts.

Some spirits find comfort in being away from home. For one weary traveler, he may never have left the Inn. This can be said for the several sightings seen in room 12. Amongst the furnishings in room number twelve is a rocking chair that is sometimes inhabited by an older man who can be seen slowly rocking in it.

THE LADY IN THE MIRRORS

If you happen to be at the old Doe Run Inn property, don’t check your reflection. It has been said that mirrors are haunted in the old hotel. The reflection of a younger woman can be seen throughout the inn’s mirrors. She is dressed in turn of the 19th-century fashion. She is also said to have an expression of melancholy or loss on her face when she is seen.

The battle for the soul of our nation was one term used for the Civil War. The state of Kentucky was not spared from that war either. It makes sense that someone caught in the war, or on their way home, could have taken quarters at Doe Run. Perhaps one soldier never left. When Doe Run was still open and operational, staff had physical encounters as well with an entity. It appeared as the apparition of a young mischievous Confederate soldier. It was rumored that he actually untied the shoelaces of employees and retied them very quickly causing many to fall.

Sandra – told Aug. 2016. I lived in Meade County and after moving away, had the opportunity to spend a night with my cousin at Doe Run Inn. I had heard it was haunted when I was a teenager, but no one I knew who had worked there ever saw a “ghost”. My cousin and I woke up after midnight to the sound of someone stomping up the stairs. We thought it was one of our boys that were staying across the hall, so I jumped up to scold them and get them back to bed. When I opened my door the stairway lights were out and everything was pitch black. I went across the hall and opened our children’s room door and found them asleep. I ran back across the hall to get my cousin, telling her something was strange. We turned on all our lights and started getting dressed. We couldn’t find our shoes! Anywhere! We both were completely frightened by this point and went to the boys’ room and laid on the floor beside their beds trying to sleep for the rest of the night. The children never woke up through the night. In the morning we got them up and got ready to get out of there. Except we couldn’t find their shoes either! I went downstairs barefoot to ask the manager (employees didn’t stay there at night then) if anyone had seen any shoes and he looked at me funny and said ” we found 5 pairs of shoes in the freezer this morning when the cook started fixing breakfast. Looks like our ghost was busy”.

MEADE COUNTY’S OWN WOMAN IN WHITE

A White Lady (or Woman in White) is a type of female ghost, typically dressed in a white dress or similar garment, reportedly seen in rural areas and associated with local legends of tragedy. White Lady legends are found in many countries around the world. Common to many of these legends is an accidental death, murder, or suicide, and the theme of loss, betrayal by a husband or fiancée, and unrequited love. One such story was told by former Doe Run Inn employees. Many times while maintaining the extensive grounds staff report seeing a woman dressed in white. She would be edging herself along the creek as if looking for someone in it.

Chantelle – told June 2018. My parents own a property in Brandenburg on the river, which they visit periodically to maintain. On one of these occasions in December of 2006 when I was only 16, they thought it would be cute to stay a night at the inn. We took a large room on the second floor with 3 beds. Being a teenager cold and bored in the middle of nowhere, I complained openly all night about the room. After my parents had fallen asleep, I was unable to do so due to my father’s relentless snoring. I found myself shouting “Shut up!” for a good two hours before dozing off. There was a moment around 3am when my phone, my mom’s, and sisters all died one by one. I could hear the virgin mobile jingle as they shut off. Then maybe 15 minutes after I finally fell asleep, something very angrily and aggressively lunged at my neck causing me to sit up screaming. It still throbbed as I yelled for everyone to wake up. I blame my teenage self for this, but it left me frightened and fascinated.

Do you have a ghost story? Do you know something weird about the history of Meade County? Email us. meadecountyky@gmail.com.